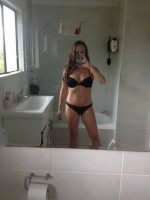 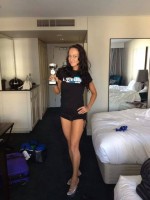 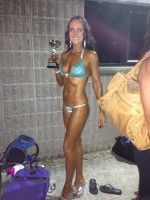 So Leon has asked me to give a testimony. Was not going to, due to its serious nature and fear of what others may think but after Grace’s quote ” it’s not weak to speak”, here I go….

Last January I tried to commit suicide. Luckily I was found in time however I was not happy about that and so for the whole of last year I drank.. Heavily. I think it was another way to kill myself. I was very sick mentally. I was utterly lost and no part of my former self existed. I grew up as a dancer and sprinter and had been a bikini model in my early 20’s but drinking 3/4 bottle of jack Daniels and coke a night saw me put on weight and I was for the first time 60kg. I did however wont to get better as my four kids deserved more so after my good friends Nikki and Brad Saunders started seeing a new trainer at Ezyfit Kawana and had amazing results, I decided to ask for his help.

I started with Leon in November but not consistently until December I saw a bikini mommas promo and commented how id like to look like that and Leon said he could get me there. I wasn’t sure but decided to have a go. My 19 week prep was not ideal as apart from having to face my demons I had a traumatic personal issue that constantly sidelined me and had me having occasional drinking binges but Leon’s caring yet straight shooting coaching had me keep getting up and I made it to the end and even placed 5 th in bikini diva 30+!

My goal in the comp was always to obtain a healthy mind again and I surpassed that . I conquered my bad drinking habit, lost 13kg, 12 cm off my waist and I feel at peace once again with a fire I’m my belly to become all I can be. I could not have done it without Leon and I’m eternally grateful

It’s how you Think

Also available on these great platforms

Gongjie ALlaki
08:34 01 Jul 21
Leon is exceptional as what he does, his work ethic and commitment to helping his clients achieve their goals is... admirable. He has helped so many with their fitness journey as well as their mental well being. His knowledge in the fitness industry, dedication to his clients and his willingness to go far and beyond makes him the best personal trainer / coach on the Sunshine Coast.read more

Shivaguru Kumar
22:11 29 Jun 21
I cannot thank Leon enough for all the help he has provided. He is one of the best coaches, but he touches his clients... life beyond just training. When I was going through a tough time, he reached out to me and got me out of my depression. Absolutely thankful to have him on my side. the kind of friendship that was built and how much he has taught me about resilience, persistence, discipline has helped me find my strength.I cannot recommend him enough and also he will keep you accountable, he will get you to your best self, even when you don’t believe you can.read more

Kathleen Munn
09:57 29 Jun 21
Leon is incredibly talented, knowledgeable, yet so very humble. He’s motivational, passionate, disciplined, always... looking for ways to improve, but most importantly, he ingrains these same qualities in the athletes he coaches. He is the kindest human I've had the pleasure to know and his energy and enthusiasm is contagious.  My confidence was extremely low when I started my journey with Leon.  I had poor self esteem and even though I'd competed for 2 years, I had a terrible relationship with food and self image and needed a serious change.Leon's coaching style is one that guides you towards working on answers on your own through a journey of reflection of your behaviors, motivations and actions. Mindset is an integral part of Leon's coaching and everyday he teaches you something to better yourself and your mindset.  Communication is key with Leon and every conversation leaves you feeling empowered and energised.Leon cares enormously about everyone he works with.  His training builds well conditioned athletes, but most importantly, his approach builds confidence in his athletes to believe in their ability to reach their full potential.read more

Kel Watkins
09:55 29 Jun 21
I’ve been trained by this beautiful human being for 7 months now.When I met Leon I was exhausted, lost and... vulnerableI am so thankful to have Leon take me on and to be part of my journey and goal.His knowledge, expertise, passion for this sport is outstanding and to have a coach whom has his heart on his sleeve, generally cares for his clients and promotes and dignifies a clean sport.You walk into head quarters he has an abundance of energy and a smile that’s infectious.To put it simply Leon is the Craig Bellamy of this sport.I’m forever blessed and thankfulread more

Jeannine Paterson
09:27 29 Jun 21
I have only been training with Leon for a few weeks but already noticing change. I love the weekly check ins as it... helps keep me stay accountable and on track. The program is great especially for people who work full time and need some flexibility with their training. Leon is always there to answer questions along the way, and super fast at responding. He is knowledgeable and lives by example as such an inspirational person. He is one of the most positive people I’ve ever met - always has a smile that will brighten your day - his positivity is totally infectious. If you need help with goal setting and a coach who will help you achieve them then Leon is your guy.read more

Kyle
09:13 29 Jun 21
Absolute legend of a coach! Super professional to work with. Not only raises the bar for physical conditioning, he... strives to work on your mental health. He is a coach that anyone can be proud to call their mate, goes well and truly above what is required of him.read more
Next Reviews